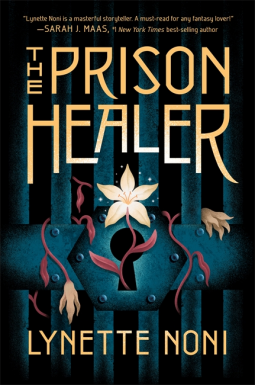 I received an e-arc of this book from the publisher via NetGalley in exchange for my honest review. This did not affect my opinion of the book in any way.
Series: The Prison Healer #1
Publisher: Hodder & Stoughton

Here at Zalindov, the only person you can trust is yourself.

Seventeen-year-old Kiva Meridan is a survivor. For ten years, she has worked as the healer in the notorious death prison, Zalindov, making herself indispensable. Kept afloat by messages of hope from her family, Kiva has one goal and one goal only: stay alive.

Then one day the infamous Rebel Queen arrives at the prison on death’s door and Kiva receives a new message: Don’t let her die. We are coming.

The queen is sentenced to the Trial by Ordeal: a series of elemental challenges against the torments of air, fire, water, and earth, assigned to only the most dangerous of criminals. Aware the sickly queen has little chance of making it through the Trials alive, Kiva volunteers to take her place. If she succeeds, both she and the queen will be granted their freedom.

But no one has ever survived.

And with an incurable plague sweeping Zalindov, a mysterious new inmate fighting for Kiva’s heart, and a prison rebellion brewing, Kiva can’t escape the terrible feeling that her trials have only just begun.

From bestselling Australian author Lynette Noni comes a masterful and action-packed YA fantasy perfect for fans of Sarah J. Maas and Sabaa Tahir.

I was rather conflicted about The Prison Healer. In fact, I finished this almost a week ago and I’m still not entirely sure how I feel about it!

The Prison Healer gripped me right from the very beginning. I thought the prison setting was quite original in a YA fantasy, where the daily reality of living in a place like Zalindov is represented and the main characters aren’t constantly planning an escape. In some ways, Kiva almost seems resigned to her fate (even though she continues to hope her family will free her) and tries to make the most of her circumstances.

The world-building was also rather well executed and the elemental magic system was clear and easy to follow. There was a lot of telling rather than showing, but I guess I felt more forgiving of it because the characters were stuck inside the prison and, well… couldn’t show much. The Trials themselves were, for me, probably the weakest part of the book but I still felt the pressure and anxiety Kiva was under. Despite that, they felt a bit repetitive and, by the time the final one rolled around, I had no more doubts as to what would happen next. The search for a cure to the plague sweeping the prison was by far more interesting for me, even though that too became slightly monotonous by the end, but again I could feel Kiva’s frustration and concern.

Kiva was definitely the best part of the book. She’s a highly compelling and complex character, struggling to survive in a place meant to crush and destroy everyone who sets foot inside. Her guarded behaviour felt very realistic in an environment where no one can be trusted, and I enjoyed seeing her grow and change throughout the story. I loved having a main character in a fantasy book whose main skills lie outside fighting, quite literally carving her place in this world while trying to make a difference in spite of everyone’s suspicions and hatred. The rest of the cast was also very well-developed, and I enjoyed the group dynamic immensely.

So, all good right? Well, not quite. The Prison Healer was shaping up to be one of my favourites so far this year… until the ending. Now, I’m definitely in the minority here and most people seem to have greatly enjoyed the ending, but for me it really fell flat and kind of ruined the whole book. It just felt really inconsistent with everything we had seen and heard so far, and meant Kiva had somehow been lying the whole time… in her own thoughts? I could have accepted it far more easily if we hadn’t been following her POV, inside her head, thoughts and feelings, for the whole book. As it was, it just seemed slightly too convenient and built for the sake of a big shocking moment. It was a real shame, because I had been loving it up until then!

Overall, The Prison Healer was an engaging read and (minus the ending) a solid start to a new series. I’ll probably continue this as I did love the characters and I’m curious to see what will happen next!

4 thoughts on “Review: The Prison Healer by Lynette Noni”