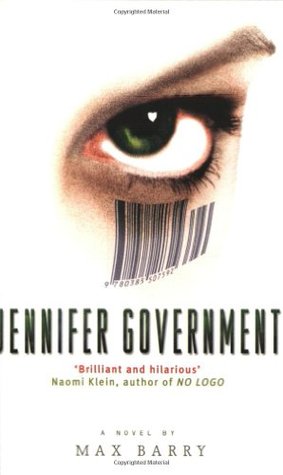 In Max Barry’s twisted, hilarious and terrifying vision of the near future, the world is run by giant corporations and employees take the last names of the companies they work for. It’s a globalised, ultra-capitalist free market paradise.

Hack Nike is a lowly merchandising officer who’s not very good at negotiating his salary. So when John Nike and John Nike, executives from the promised land of Marketing, offer him a contract, he signs without reading it. Unfortunately, Hack’s new contract involves shooting teenagers to build up street cred for Nike’s new line of $2,500 trainers. Hack goes to the police – but they assume that he’s asking for a subcontracting deal, and lease the assassination to the more experienced NRA.

Enter Jennifer Government, a tough-talking agent with a barcode tattoo under her eye and a personal problem with John Nike (the boss of the other John Nike). And a gun. Hack is about to find out what it really means to mess with market forces.

A friend suggested this book to me a while ago, but I had never gotten round to reading it. Until I stumbled across this while browsing the shelves in my local library, and checked it out and read it in one sitting. What a ride this book takes you on!

Set in a version of our world where corporations have taken full control of society and money can buy absolutely anything, this book explores what would happen if trade became the only thing that counts. The starting event is decidedly chilling: in order to ensure wonderful sales for a new line of shoes, Nike builds a marketing campaign that involves shooting (and killing) teenagers, and government agents can do very little to stop them. This event is the first step in a highly tense, international intrigue brought forward by corporations all around the world to gain more power.

The storyline was incredibly well-constructed, and I could really feel the tension from early on in the book. I read this book really quickly because I just had to know if the corporations would succeed or if Jennifer Government would be able to stop them in time. Speaking of Jennifer Government, she was definitely my favourite character in the book: she’s smart, tough, confident, driven, and really cares about doing her job right. Just the type of character I love. The only thing I wasn’t too keen on was the romance, which seemed to me to just come out of nowhere and wasn’t entirely necessary for the plot. I felt like it was just romance for the sake of having a romantic relationship involving the main character in the book, but I really wouldn’t have missed it had it not been there. On a related topic, the book presents a lot of characters, and while I easily got to like Jennifer Government, I had a little more trouble getting attached to the others.

Overall, this was a really good read. I liked the action and the intrigue, as well as the fact that there was a political-sociological undertone breeding further reflection on society as it currently is. It definitely sparked some interesting discussions around the dinner table!