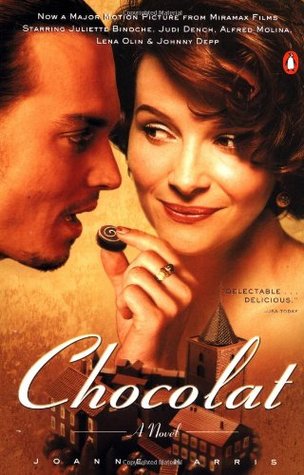 When an exotic stranger, Vianne Rocher, arrives in the French village of Lansquenet and opens a chocolate boutique directly opposite the church, Father Reynaud denounces her as a serious danger to his flock – especially as it is the beginning of Lent, the traditional season of self-denial. War is declared as the priest denounces the newcomer’s wares as the ultimate sin. Suddenly, Vianne’s shop-cum-café means that there is somewhere for secrets to be whispered, grievances to be aired, and dreams to be tested.

I was quite disappointed by this book. I had seen the film a long time ago, and remembered I liked it very much. So, naturally, I assumed I would like the book as well, if not even more so since that is usually the way things go with me. And, let’s face it, how can a book revolving around chocolate not be good? I wanted to like this book SO BAD! But unfortunately, it just didn’t do it for me. Maybe my expectations were too high, or maybe I just wasn’t in the right mood for this story, but I just feel that it was kind of a meh read.

Of course, there were some positives to it. Some of the characters were designed quite well, which made them really interesting to follow. Vianne, in particular, is very engaging and I really liked the fact that she was haunted by her past yet was willing to move forward from it, to fight her personal demons for her daughter’s sake. She’s a smart, funny and independent woman, and just the kind of character I wish I could be friends with. Seriously, she knows what you’re feeling just by looking at you, always knows how to make you feel better and makes incredible chocolate treats! I also liked the fact that the book alternated the POV of Vianne and Reynaud in the narration, as it helped me to understand them more, as well as the reasons behind their behaviour.

Yet, I still had serious difficulties in being fully invested in the story. Both these characters had some pretty bad experiences in the past which seriously affected the way they behave. While at the beginning I was really curious and eager to find out all about the characters’ backstories, the events were introduced very vaguely and confusedly referenced so many times throughout the book that when the big revelations finally came, I just no longer cared about them. I had also serious difficulties in really bringing myself to care about any of the other characters. I couldn’t quite point to one single factor, but there was something that just made them not work for me.

I might try to re-read this book at some point in the future to see if my feelings towards it change, but for now I’ll just make up for my sadness with A LOT of chocolate.