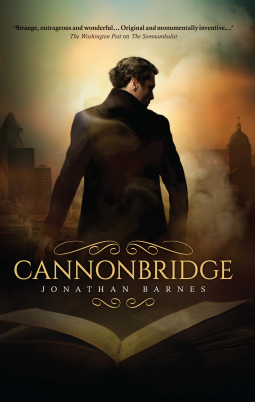 I received an e-arc of this book from the publisher via NetGalley in exchange for my honest review.

Flamboyant, charismatic Matthew Cannonbridge was touched by genius, the most influential creative mind of the 19th century, a prolific novelist, accomplished playwright, the poet of his generation. The only problem is, he should never have existed, and beleaguered, provincial, recently-divorced 21st Century Dr Toby Judd is the only person to realise something has gone wrong with history.

As bibliophiles everywhere prepare to toast the bicentenary of the publication of Cannonbridge’s most celebrated work, Judd’s discovery will lead him on a breakneck chase across the English canon and countryside, to the realisation that the spectre of Matthew Cannonbridge might not be so dead and buried after all…

I really didn’t like this book, which makes me feel bad, because I really wanted to. That, and I hate writing negative reviews. I am NOT happy about this, people. But that may be the subject of another post. Someday. Maybe. For now, I’ll just go on being unhappy about this situation.

So, anyways, back to the book. I went in thinking it would be a mystery/thriller about a literary hoax. Here I was, expecting a fast-paced, exciting journey across England as our insightful academic searches for clues to uncover the secret of Matthew Cannonbridge and how he got to be England’s most famous author. Great story, right? Well, not quite.

Turns out, there’s a whole lot of supernatural forces involved in the creation of Cannonbridge. Now, I don’t usually have a problem with the presence of supernatural elements in a story. In fact, most of the time, I quite like it. But in order for that to happen, I have to understand what is happening. With this book, I just went from confused to more confused. I just could not make sense of what was happening, and that really frustrated me. Of course, that may just be me, and someone else reading it could actually make sense of the whole thing much better than I did.

The characters were also very unrelatable and generally unlikeable. The story jumped back and forth between the modern day, where Toby Judd starts his investigation into Cannonbridge, and the past, where Cannonbridge himself goes on to meet a wide variety of important authors, like Mary Shelley, Charles Dickens and Oscar Wilde. I was actually quite intrigued by this idea, of seeing the hoax take place while at the same time following the present-day investigation. That was back when I thought this story revolved around a hoax.

As the story progressed, I started to doubt the usefulness of this device, and actually became very annoyed with it at one point. My excitement at the idea that we would see Cannonbridge influence the greats of English literature just vanished, as I felt these chapters to read more like an endless parade of big names with almost no very little weight on the story. The characters’ motivations, and even most of their actions, made very little sense to me, and I had a very hard time seeing where they were coming from.

Even though this wasn’t a long book (less than 300 pages), I found it extremely difficult to go through with it. I actually considered DNFing at several points, but just kept going hoping that it would get better later on, or that it would have a wonderful conclusion that would just blow my mind. It didn’t. I was left just as disappointed at the ending as I had been throughout the whole read. I was really sorry about this, because this book had so much potential. But, for me, it failed. It failed as a thriller and it failed as a supernatural. I wasn’t thrilled at all! I was just bored for the most part, and confused for the rest. Now, I’m glad I finished it, and I’m ready to move on.