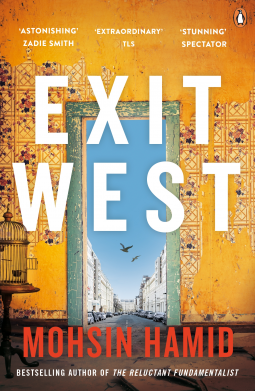 In a city far away, bombs and assassinations shatter lives every day. Yet, even here, hope renews itself, welling up through the rubble. Somewhere in this city, two young people are smiling hesitating, sharing cheap cigarettes, speaking softly then boldly, falling in love.

As the violence worsens and escape feels ever more necessary, they hear rumour of mysterious black doors appearing all over the city, all over the world. To walk through a door is to find a new life – perhaps  in Greece, in London, in California – and to lose the old one for ever…

What does it mean to leave your only home behind? Can you belong to many places at once? And when the hour comes and the door stands open before you – will you go?

Well, this is a tough one. I definitely liked this book, but am struggling to find words to explain why… Exit West is an emotionally powerful book, yet it is always soft: it moves slowly and delicately through Saeed and Nadia’s story, never quite developing into a full-blown drama (despite the war setting), but despite that I felt a certain heaviness of heart throughout.

Hamid’s prose is gentle and poetic, and manages to conjure all sorts of feelings, from the most noble to their complete opposite. I had read only one of his books previously, The Reluctant Fundamentalist, and felt the same sort of vibe here. I personally love his writing style, but am fully aware that it is fairly unique and as such may not appeal to everyone. Beware if you like reasonable, logic books, as this is definitely not one of them: while I wouldn’t go as far as calling Exit West magical realism, it does ask the reader to suspend their disbelief as our protagonists cross magical doors that link their war-stricken country to move to Europe.

Exit West is a highly metaphorical read which, through its quiet and lyrical prose, provides one of the best accounts of the so-called “refugee crisis” I have read so far. Following two young people in love as they do their best to continue living normally while their country crumbles around them under the weight of war, it is a heartbreaking account of the difficult choices and sacrifices that so many are forced to make – and reminds us that deciding to leave is only the beginning of the struggle. Going further than this, Hamid shows us the long-term effects of forced displacement and how it forces change both in Saeed, Nadia and the other migrants around them, and in the societies that receive them.

Incredibly relevant to today’s debates, Exit West is a touching tale of love, war and disillusionment; a harrowing account of displacement, survival and growing up. This book reaches across the whole spectrum of human emotions, and that is what makes it especially hard for me to review. In short, highly recommended.