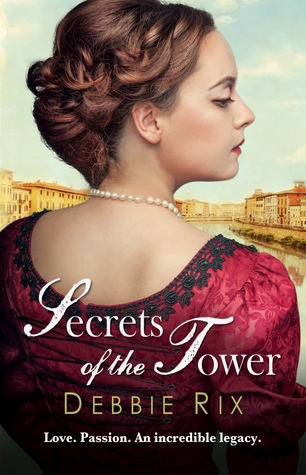 I received an e-arc of this book from the publisher in exchange for my honest review.

Two women, centuries apart, bound together by the secrets of one of the most iconic buildings ever created.

Sam Campbell sits by her husband’s hospital bed. Far from home and her children, she must care for Michael who is recovering from a stroke. A man she loves deeply. A man who has been unfaithful to her. Alone and in need of distraction, Sam decides to pick up Michael’s research into the Leaning Tower of Pisa. Immersing herself in the ancient city, she begins to piece together the mystery behind the creation of the tower, and discovers the woman that history forgot…

Berta di Bernardo, the wife of a rich merchant, sits in her chamber, dressing for a dinner party. A gathering that will change the course of her life and a young master mason, Gerardo, forever. A strong, intelligent woman, Berta’s passion for architecture also draws her closer to Gerardo. As she embarks on a love affair, her maid Aurelia also becomes spellbound by the same man. Yet for Berta, her heart’s desire is to see the Tower built, and her determination knows no bounds.

I have been to Pisa several times over the years, and I absolutely love the city and, of course, its wonderful monuments. So, when I read the blurb for this book, I was at once delighted and scared to see it was set in one of my favourite cities. But, to be honest, I was mostly scared, because in my experience, foreign writers setting their books in Italy tend to get our country very, very wrong. I often find myself reading books set in Italy, or featuring Italian characters and thinking “That would just never happen!”. So I was very relieved when I found that Debbie Rix’s Pisa is actually very realistic, as are her Italian characters. There is no stereotypical nonsense, but real, relatable characters who act and talk like real human beings. And I think no one mentions eating pasta throughout the book, so HURRAH for an author who finally recognises that there are other foods in Italy beyond pasta!

The story itself was captivating. Starting from the present-day question of who built the Tower of Pisa, the book moves back and forth in time to show us both the modern research and what actually happened in the past. Of course, most of it is fiction, but still the author put in an amazing amount of research to make all the historical bits feel realistic. And it really pays off. If I didn’t know that the story of Berta and Gerardo probably didn’t go quite like it is told in this book, I may just have believed it completely. I loved getting to know the characters, especially Berta. I adore strong, independent women who challenge their predetermined role in society, so Berta, with her desire to become a patron of the arts and leave her mark on the city of Pisa, was right up my alley.

There were a few things that didn’t quite work for me, mainly the love triangle. Even though this one was constructed pretty well, it just bothered me that it existed at all, and just made me really angry with the characters involved, especially Gerardo. A few times, I wanted to shake him and shout “Just make up your mind already!”. I also had a bit of trouble connecting with Aurelia, as I failed to see her role in the story for most of the book, except as a rival in love for Berta. I’m not sure if she could have had any other role though, so maybe my dislike for her was only due to the fact that she made the love triangle a reality. Mmm, I still have to make up my mind on that one. I also liked the way snippets of the present were inserted to show us the research that Sam carries out in modern Pisa to unearth the mystery of the Tower. I was definitely more invested in the story of Berta than in that of Sam though, but that may just be because I had more time to get myself attached to the character, since the past is given considerably more space than the present.

Overall, this is a really solid read, perfect for those who like a good historical mystery with interesting characters and a beautiful setting. And if you’re anything like me, it might prompt you to do a little bit of your own research into the history of the Leaning Tower of Pisa (READ: I googled it) and find out more great trivia about this architectural masterpiece, which can then be used to dazzle your friends with your knowledge at the next dinner party (I know I might just do that).