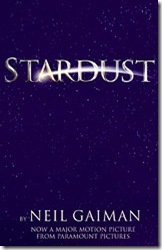 Hopelessly crossed in love, Tristran Thorne leaves his mundane Victorian-English village on a quest for a fallen star in the magical realm bordering his village. The star proves to be an attractive woman with a hot temper, who plunges with our hero into adventures featuring witches, lions and unicorns, plotting elf-lords, ships that sail the sky, magical transformations, curses and all the rest.

Once upon a time, many years ago, I saw the film version of Stardust and loved it so much that I have seen it multiple times (I’m not going to tell you how many, because it’s too many to count) again since. How could one not be captivated by the adventures of Tristran and Yvaine? A world populated by fairies, unicorns, witches and flying pirate ships? That’s exactly my cup of tea. So, imagine my delight when I finally discovered the existence of a book on which the film was based! Yes, my inner bookworm went something like this:

Obviously, because I’m a busy bookworm with a massive TBR pile, it took me several years to actually read the book after I bought it. Until now!

This was my first Neil Gaiman novel, and I really liked it. I loved his writing style and the way he made his characters come to life, even the ones we didn’t really know much about. My biggest disappointment when I came to the end of the book was that I wanted MORE. I sooo wasn’t ready for this book to end. I wanted to know more about Tristran and Yvaine’s adventures in the magical world! Even though I had a bit of trouble warming up to Tristran’s character, eventually he won me over, and I actually ended up really liking him.

This was a great fantasy book, that I managed to enjoy while still retaining my love for the film. That’s probably because the two are actually pretty different, especially when it comes to the ending.

DO NOT READ FURTHER UNLESS YOU WANT THE ENDING TO THE BOOK AND THE FILM RUINED!

I actually preferred the film ending to the book. It was WAAAYYY more magical to have Tristran and Yvaine go live together among the stars after many years and a loving family on Earth. I was kind of disappointed to see that in the book they don’t actually have children and Yvaine keeps on living and ruling alone forever after Tristran dies. It lost some of the magic (actually, on second thought, make that a lot of the magic).

And of course, I was really sorry to see that Captain Shakespeare didn’t make an appearance, since he was one of my favourite characters in the film. I mean, seriously, how could you not love this guy?

Overall, I enjoyed reading Stardust, and I still appreciate both the book and the film. Very well-written and interesting story, plus likable characters and fantastic settings equals a book fantasy-lovers should not miss!