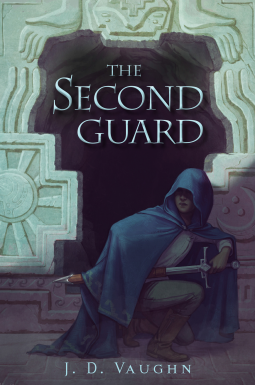 I received an e-arc of this book from the publisher  via NetGalley in exchange for my honest review.

In the peaceful realm of Tequende, all second-born children at the age of 15 must journey to the Alcazar to fulfill the mandate of the Oath of Guilds. There, they train to earn a place among the queen’s legendary Second Guard, or work as indentured servants.

Talimendra has always wanted to join the Guard, but there are dark rumors in the queendom that she may not be ready for. Rumors that whisper of greed, traitors and war. There is very little time and too many unanswered questions, but one thing is for certain: if there is a traitor among the Second Guard, then everyone – including the queen – is in grave danger.

This was a very enjoyable read, with a good plot and likable characters. I liked the idea of this peaceful queendom (which sounded to me like it could easily have been in Latin America, so YAY for diversity) where all families are required to contribute to the keeping of the peace by sending their second-born sons and daughters to train as soldiers and serve in the renowned Second Guard, or spend some years as servants should they fail their training.

I found that the author did a pretty good job of building up this fantastical world, which resembles ours so much, and yet is so different at the same time. I had a bit of trouble keeping up with all the names and the system of Guilds at the beginning, but I quickly got my head around that. I loved the idea of putting extracts from a book on the history and culture of the queendom between the various chapters: it made things much easier to understand, without slowing down the story with a lot of explanations and history lessons.

I also really liked all the characters, particularly the MC, Tali. She was so determined to get where she wanted to, and to do what she thought was the right thing! I loved the fact that she had to fight to get to where she wanted, and she made lots of mistakes throughout due to major flaws in her personality. To me, she felt a lot more like a real teenager than kids in fantasy novels usually do. And I really liked the fact that even the secondary characters had a big role to play, and I did like to read about them just as much as I liked reading about Tali. The only thing I wasn’t too keen on character-wise was the fact that, sometimes, Tali and her friends didn’t actually feel like 15-year-olds to me. At times, they just talked and behaved as if they were a lot older, and then went right back to behaving like normal kids. Luckily, that didn’t happen too often, so it didn’t really affect my enjoyment of the book.

Of course, I was waaaay out of the suggested age-range for this one, so I wasn’t actually all that surprised by some of the twists in the plot, but I ended up really liking the book regardless. My major issue with this title was the fact that I found the middle section to be really slow compared to the rest of the book, since a lot of time is devoted to describing the training all the kids go through before they can become members of the Second Guard. Of course, that’s just me and this was an important part of the novel, but still I wonder if maybe that section could have been made a little shorter than it was.

Overall, this is a very pleasant MG novel, that will likely appeal to readers outside that age range too. I will definitely look out for the next books in the series!