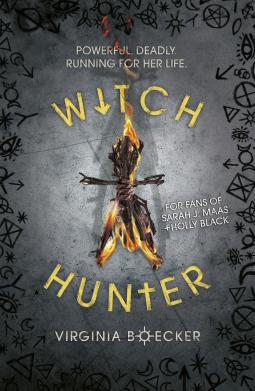 Sixteen-year-old Elizabeth Grey doesn’t look dangerous. A tiny, blond, wisp of a girl shouldn’t know how to poison a wizard and make it look like an accident. Or take out ten necromancers with a single sword and a bag of salt. Or kill a man using only her thumb. But things are not always as they appear.

Elizabeth is one of the best witch hunters in Anglia and a member of the king’s elite guard, devoted to rooting out witchcraft and bringing those who practice it to justice. And in Anglia, the price of justice is high: death by burning. When Elizabeth is accused of being a witch herself, she’s arrested and thrown in prison. The king declares her a traitor and her life is all but forfeit.

With just hours before she’s to die, Elizabeth gets a visitor – Nicholas Perevil, the most powerful wizard in Anglia. He offers her a deal: he will free her from prison and save her from execution if she will track down the wizard who laid a deadly curse on him. As Elizabeth uncovers the horrifying facts about Nicholas’ curse and the unwitting role she played in its creation, she is forced to redefine the difference between right and wrong, friends and enemies, love and hate… and life and death.

When I first read the blurb for The Witch Hunter, I thought I would love this book and I couldn’t wait to dive in. Then, I started seeing all the hype surrounding it, and I feared it wouldn’t be as good as I was expecting it to be. I just tend to have a bad relationship with really hyped books… So I put it aside. Until now. And wow, did I like this book! Now I’ve actually finished reading it, I’m kicking myself for leaving it so long. It wasn’t a disappointment at all! In fact, it’s easily one of the best books I have read this year so far.

Right from the very start, I was immediately drawn into the story. The setting is an alternative 16th-century England where magic has been banned and witches and wizards are now being hunted by witch hunters, and I really enjoyed the way the author dealt with the world building. I could understand how things worked, and even some of the main events that had brought that situation to life without ever feeling like I had just been given a lecture in the history of Anglia. Of course, this is a fantasy novel, so most of the stuff that happens doesn’t really make a lot of sense if closely examined, but I did find it easy to suspend disbelief and just go with it. The merit for this definitely goes to the writing. The descriptions weren’t too heavy, the narrator wasn’t overwhelming and most of the dialogue was really witty and well-constructed.

As for the characters themselves, I ended up really liking all of them. I had some difficulties getting attached to Elizabeth, the main character, initially. But as the story progressed, and she developed as a character developed, I started to feel a stronger connection with her. The growth she undertakes throughout the novel is just great, and I felt like I really saw her develop and mature in front of me. The romance was also really cute. I particularly liked how it developed slowly and didn’t take over the whole plot. It was just there, on the sidelines, which is exactly where it should have been. I also liked how each of the secondary characters had a part to play to make sure that things went the way they were supposed to. Of course, not everyone’s personalities were incredibly well developed, but I guess that’s kind of normal when there are as many characters as there were here. I do hope we’ll get to know those under-developed characters better in the sequel.

Overall, this was a really great read and I highly recommend it to everyone! A nicely-paced fantasy with good characters and settings. There were quite a few twists throughout, and even though a few very predictable, it did manage to surprise me a couple of times. Definitely a new favourite series for me!