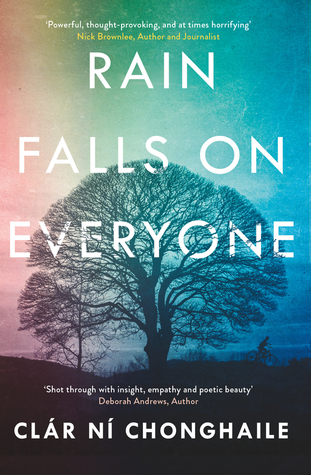 Theo, a young Rwandan boy fleeing his country’s genocide, arrives in Dublin, penniless, alone and afraid. Still haunted by a traumatic memory in which his father committed a murderous act of violence, he struggled to find his place in the foreign city.

Plagued by his past, Theo is gradually drawn deeper into the world of Dublin’s feared criminal gangs. But a chance encounter in a restaurant with Deirdre offers him a lifeline. But Theo and Deirdre’s tender friendship is soon threatened by tragedy. Can they confront their addictions to carve a future out of the catastrophe that engulfs both their lives?

What a book! It’s been a few days since I finished reading this, and I’m still not sure I can make sense of what I thought about it. This is easily one of the best books I’ve read this year, that much I know. But trying to coherently explain why that is, is entirely another matter…

Rain Falls on Everyone is a book that just resonated with me right from the start. Clár’s gorgeous writing style managed to draw me in and keep me wanting always more. This was one of those fairly rare occasions where I really couldn’t bring myself to put the book down: every time I thought I ought to close up, a little voice in my head kept telling me “Just one more chapter… it won’t be too much longer, will it?” And so I ended up taking this book everywhere with me until it was over… exactly at the right moment within the story and definitely way too early for me.

I don’t know what magic the author employed to get me hooked, but whatever it was, it worked! I was immediately drawn into Theo’s and Deirdre’s stories and I didn’t really want to say goodbye at the end, and never throughout the reading did I find a dull moment. The characters were so amazingly real, I felt like I could actually meet them on the street, while at the same time being interesting and diverse enough that their stories really did deserve to be told. From racism to dealing with trauma, from domestic violence to drug abuse, there really isn’t a single controversial topic that Clár shies from. Issues that are often trivialised and dismissed as always affecting “someone else” could actually touch anyone’s life at any time, even those beyond suspicion. Starting out as small, they creep up on you and grow subtly until it’s just too late to be rid of them without paying a significant price. It’s an ugly truth, and one that this book represents without ever trying to sugarcoat reality.

Personally, I have a particular interest in books relating in some way to the topic of immigration and as a result often end up reading quite a lot. It’s fairly unusual, however, for me to find no flaws with the way this defining experience is portrayed. This was not the case here. Theo’s experiences of being a foreigner in a country which until recently wasn’t very used to diversity, dealing with trauma and survivor’s guilt, racism and the difficulty of “fitting in” are described very realistically, in incredibly vivid detail, free of the usual cliches and stereotypes. The realism of it all is definitely aided by the wonderful setting, so much so that I could basically see the Dublin streets in front of my eyes, and hear the accent in characters’ dialogues. Having been to Dublin myself in the past, this book had the added bonus of letting me enjoy a little trip down memory lane.

Overall, this was a fantastic read, one of those books that I felt deeply and that will stay with me for a long time. Harrowing and tender, it will make you laugh and cry, it will inspire and frighten you, but above all it will make you think about all the forgotten Theos and Deirdres that somewhere, in this great big world, are fighting to keep their story going on for just a little bit longer and, maybe, have a happy ending after all.