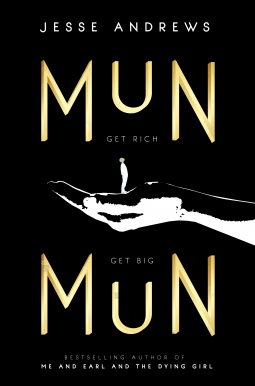 In an alternate reality a lot like our world, every person’s physical size is directly proportional to their wealth. The poorest of the poor are the size of rats, and billionaires are the size of skyscrapers.

Warner and his sister Prayer are destitute – and tiny. Their size is not just demeaning but dangerous: day and night they face mortal dangers that bigger, richer people don’t ever have to think about, from being mauled by cats to their house getting stepped on. There are no cars or phones built small enough for them, or schools or hospitals, for that matter – there’s no point, when no one that little has any purchasing power, and when salaried doctors and teachers would never fit in buildings so small. Warner and Prayer know their only hope is to scale up, but how can two littlepoors survive in a world built against them?

Brilliant, warm and funny, this is a social novel for our times in the tradition of 1984 or the work of Douglas Adams.

I was incredibly conflicted about this book. On the one hand, I really admire the originality of the author: the world he creates, where people’s size varies depending on how wealthy they are, is incredibly creative, and provides an excellent social commentary as well as an entertaining background. On the other hand, however, I found this book very hard to read.

While I appreciate the thought that must have gone behind inventing a whole new language for the world, I found it incredibly difficult to understand what was being said. Perhaps it was due to the ARC formatting, or maybe that was the actual intention, but too many times I was faced with words smashed together and sentences that just made no sense on a first reading. I had to go back and re-read several times in order to understand what was going on, and that just made it impossible for me to enjoy the book as much as I would have wanted to. I also found the dreamworld to be a tad too complex for my liking, and struggled to understand without re-reading whole passages.

I didn’t particularly like the characters, but I feel that may have been the original intention: none of them seem to be particularly likable from the start, with Warner (our narrator) being the only one to seemingly make an effort but ultimately being worn down by his dire circumstances and the exploitation to which he is subject. With unlikeable characters and a plot I struggled to appreciate fully, however, this book soon fell flat for me. I seriously considered DNF’ing multiple times, but ultimately stuck it out in the hopes that it would get better. Alas, for me it didn’t.

As I said, I really appreciate the idea behind this, but the execution just didn’t work for me.