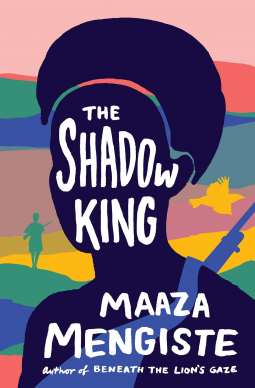 A gripping novel set during Mussolini’s 1935 invasion of Ethiopia, The Shadow King takes us back to the first real conflict of World War II, casting light on the women soldiers who were left out of the historical record.

With the threat of Mussolini’s army looming, recently orphaned Hirut struggles to adapt to her new life as a maid in Kidane and his wife’s household. Kidane, an officer in Emperor Haile Selassie’s army, rushes to mobilize his strongest men before the Italians invade. His initial kindness to Hirut shifts into a flinty cruelty when she resists his advances, and Hirut finds herself tumbling into a new world of thefts and violations, of betrayls and overwhelming rage. Meanwhile, Mussolini’s technologically advanced army prepares for an easy victory. Hundreds of thousands of Italians – Jewish photographer Ettore among them – march on Ethiopia seeking adventure.

As the war begins in earnest, Hirut, Aster, and the other women long to do more than care for the wounded and bury the dead. When Emperor Haile Selassie goes into exile and Ethiopia quickly loses hope, it is Hirut who offers a plan to maintain morale. She helps disguise a gentle peasant as the emperor and soon becomes his guard, inspiring other women to take up arms against the Italians. But how could she have predicted her own personal war as a prisoner of one of Italy’s most vicious officers, who will force her to pose before Ettore’s camera?

What follows is a gorgeously crafted and unputdownable exploration of female power, with Hirut as the fierce, original and brilliant voice at its heart. In incandescent, lyrical prose, Maaza Mengiste breathes life into complicated characters on both sides of the battle line, shaping a heartrending, indelible exploration of what it means to be a woman at war.

CW: this book contains violence, including of a sexual nature.

I first fell in love with the gorgeous art work of the cover for The Shadow King while browsing NetGalley, but I knew I HAD to read this book after looking at the blurb. Mussolini’s invasion of Ethiopia during WWII is afforded very little (if any) space in history text books around the world, but as an Italian woman, I was even more aware of really how little I knew of this chapter in history.

The Shadow King is, of course, not a history book, but, being based on the author’s own family history and extensive research, it provides a snapshot of life in a country at war. Following both the Ethiopian and the Italian armies, The Shadow King features an impressive cast of unforgettable characters. I was very impressed at how well most of these were painted, as almost every character, even the ones we meet only a few times, felt complex and real. The book avoided falling in the good people/bad people trap, showing time and again how light and dark, cruelty and kindness can co-exist within each individual.

The pacing was slightly uneven, with some sections being rather action-packed, and others moving much more slowly. Normally, this would bother me quite a bit, but for some reason it just seemed to work here. I also really liked the author’s style. The prose was beautiful and often lyrical, although it felt slightly overbearing at times and occasionally made for some very confusing sentences. In particular, the lack of conventional punctuation and the absence of quotation marks to introduce dialogues (think Saramago) definitely needed some getting used to, and may be off-putting to some readers.

The one thing that made this stop short of a 5-star rating for me was the fact that, for a book wanting to focus on the forgotten contribution of women in war, there really weren’t that many women in the main cast. Hirut and Aster were really the only fully-fleshed out female warriors, while we were introduced to numerous male fighters in Kidane’s camp. While I loved getting to know Hirut and Aster, exploring their complexities and their backgrounds, I would have definitely preferred to see more of other female characters, such as Fifi or any of the numerous unnamed women in Kidane’s army.

Overall, this was a very interesting read, tackling a lesser-known side of history with grace. I will definitely be on the look-out for more of Maaza Mengiste’s work!