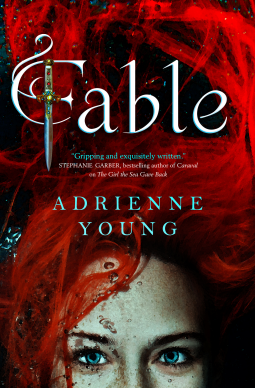 I received an e-arc of this book from the publisher via NetGalley in exchange for my honest review. This did not affect my opinion of the book in any way.
Series: Fable #1
Publisher: Titan Books

Welcome to a world made dangerous by the sea and by those who wish to profit from it. Where a young girl must find her place and her family while trying to survive in a world built for men.

As the daughter of the most powerful trader in the Narrows, the sea is the only home seventeen-year-old Fable has ever known. It’s been four years since the night she watched her mother drown during an unforgiving storm. The next day her father abandoned her on a legendary island filled with thieves and little food. To survive she must keep to herself, learn to trust no one and rely on the unique skills her mother taught her. The only thing that keeps her going is the goal of getting off the island, finding her father, and demanding her rightful place beside him and his crew. To do so, Fable enlists the help of a young trader named West to get her off the island and across the Narrows to her father.

But her father’s rivalries and the dangers of his trading enterprise have only multiplied since she last saw him, and Fable soon finds that West isn’t who he seems. Together, they will have to survive more than the treacherous storms that haunt the Narrows if they’re going to stay alive.

Fable was one of my last reads of 2020, and it easily earned a spot among my favourite reads of the year. This had everything I look for in a YA fantasy: adventure, secrets, a fascinating (if horrible) world, and just the right mix of romance and darkness.

The worldbuilding was done incredibly well here. I often have an issue with this in reading fantasy, where it sometimes seems there are either massive info-dumps or no explanation at all and we’re just supposed to somehow… know it? Definitely not the case here! The characters’ experiences, dialogues and moments of introspection allowed me to feel like I was really getting the essence of what it meant to grow up and live in the Narrows, not just witnessing a long history lecture. Now, don’t get me wrong – the Narrows sound awful and I would never, ever want to visit them, but they were also the perfect setting for this story.

The plot itself is actually quite thin, mostly following Fable as she tries to reunite with her father. But somehow I was still glued to the page, wanting to know where the characters would go next or what new disaster was waiting for them just around the corner. This is a rather dark book, with plenty of violence and cruelty, and most of the characters (especially some of the minor ones) are really ruthless. Nevertheless, I didn’t feel at all put off by this (which sometimes happens) and I really enjoyed watching Fable fight to stay alive while remaining true to herself.

I loved the characters, especially West’s crew. They keep secrets and are very guarded (and rightfully so), and it just felt right for their world that they would not easily welcome a newcomer in their midst. I would have liked to see some of them be slightly more developed, but even so it just worked. I also really liked Fable, even though sometimes she didn’t feel quite as fleshed out  as a character as she could have been. But watching her grow and try to survive while going through an inner conflict was one of my favourite things in this book. I also loved that she had actual professional skills to draw on and to carve herself a place in the ship crew. This feels actually quite rare for a strong female protagonist in YA fantasy, and I really appreciated reading it.

My biggest moan with this is the ending. It ends rather abruptly and the story feels incomplete. This will probably be resolved with the second installment in this duology – I expect it will eventually read like a single story in two volumes – but it just felt… off.

Overall, this was a really pleasant, if at times dark, read. If you’re looking for a fast-paced YA fantasy with piraty vibes and a strong set of characters, Fable is the one for you. Now, please hand me book two as soon as possible!