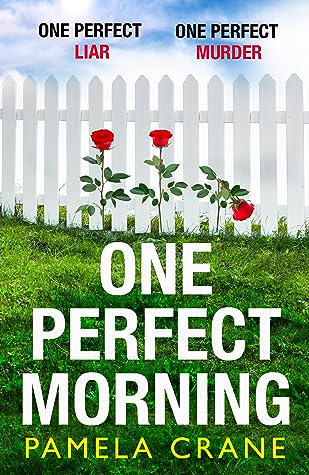 Mackenzie, Robin and Lily have been best friends since college. Twenty years on, they all live in the same neighbourhood with their perfect homes, perfect families, perfect lives…

It would seem nothing could come between these three women. Except for a betrayal.

Nothing could turn them against each other. Except for a terrible past mistake.

Nothing could tear them apart. Except for murder.

One dead husband. Three best friends who tell each other everything – apart from the truth…

One Perfect Morning is a pleasant thriller, perfect if you’re looking for an easy read on a rainy weekend, like I was.

It’s well known by now that I will read almost anything as long as there’s a big secret involved – I’m a real sucker for them. And this book really delivered on that: there were more secrets than I could keep track of! Mackenzie, Robin and Lily are three best friends who keep a whole lot from one another, and I really enjoyed slowly discovering all their secrets. Some of them were quite predictable, others really surprised me, but all of them together made for a really twisty read. I enjoyed the alternating POVs as well, allowing us to take a glimpse of each woman’s mind.

The book didn’t have a whole lot more going for it though. Most of the characters felt more like stereotypical depictions rather than well-rounded individuals. This was particularly true of the three main characters: two housewives with no discernible interests beyond their homes, children and shopping, and one overly emotional, adulterous Italian – really? I feel like there was so much unrealised potential with these characters, and while they do improve towards the end of the book, it was too little, too late.

I also found the blurb to be slightly misleading. Yes, there is a murder but that’s not really what drives a wedge between the friends. In fact, the event causing the rift happens way before murder is even contemplated and is much more complex. A lot of difficult topics are touched on throughout the book, including sexual abuse and consent, domestic violence and drug addiction. Some of them were explored more than others, and while I always appreciate complex issues such as these being portrayed and discussed in books, at times it felt as though they were just too many at the same time, and there just wasn’t enough space to deal with all of them.

Overall, this was a pleasant enough read. All the secrets were enough to keep me engaged and entertained, and the ending was certainly one I’d never see coming. While I had some issues with it, they didn’t put me off and I would be interested in reading more from this author.