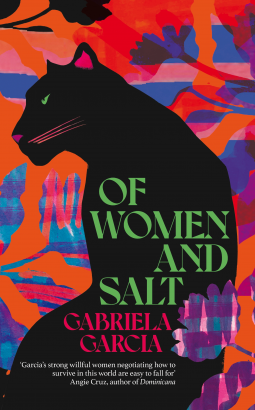 I received an e-arc of this book from the publisher via NetGalley in exchange for my honest review. This did not affect my opinion of the book in any way.
Publisher: Picador

Five generations of women, linked by blood and circumstance, by the secrets they share, and by a single book passed down through a family, with an affirmation scrawled in its margins: We are force. We are more than we think we are.

1866, Cuba: María Isabel is the only woman employed at a cigar factory, where each day the workers find strength in daily readings of Victor Hugo. But these are dangerous political times, and as María begins to see marriage and motherhood as her only options, the sounds of war are approaching.

1959, Cuba: Dolores watches her husband make for the mountains in answer to Fidel Castro’s call to arms. What Dolores knows, though, is that to survive, she must win her own war, and commit an act of violence that threatens to destroy her daughter Carmen’s world.

2016, Miami: Carmen, still wrestling with the trauma of displacement, is shocked when her daughter Jeanette announces her plans to travel to Cuba to see her grandmother Dolores. In the walls of her crumbling home lies a secret, one that will link Jeanette to her past, and to this fearless line of women.

From nineteenth-century cigar factories to present-day detention centres, from Cuba to the United States to Mexico, Gabriela Garcia’s Of Women and Salt follows Latina women of fierce pride, bound by the stories passed between them. It is a haunting meditation on the choices of mothers and the tenacity of women who choose to tell their truth despite those who wish to silence them.

Of Women and Salt was the perfect read around International Women’s Day. Following five generations of Cuban women and a Salvadorean mother and daughter, this book takes us on a journey across space and time to witness the strength and tenacity of women who choose to keep fighting against all odds.

These women are the only protagonists here, their voices (often silenced in their daily life) rising prominently to shine a light on their truths, their struggles, their pain, and their hopes for a better future. The men in their lives lurk in the background, their viewpoint unimportant and their main contribution being bringing pain and tears – or being conspicuously absent. The women finally take centre stage and reclaim what is theirs, even if only for short stretches. The book’s non-linear narration, in fact, means that it often reads more like a series of short stories or vignettes linked by a common thread.

Don’t let this book’s size fool you: despite being quite short, it is packed with content and material for reflections. It also takes some dark turns, and I found I often had to stop to give myself time to absorb what I’d just read and digest some of the harder themes. Covering everything from domestic violence to drug abuse, sexual violence and the harsh reality of a modern-day US immigration detention centre, Of Women and Salt is as far as from a light read as possible. Nevertheless, I really enjoyed it, in its own way.

The writing was beautiful and lyrical, and it quickly drew me in. The characters were complex and portrayed excellently, even if we only spent a limited time with each of them. The thing I struggled with most was the non-linear narration, but that’s something I know I often find hard to follow. Each time/location change was clearly marked at the beginning of the new section, but I still found I often had to go back to remind myself how far in the future or in the past we had moved compared to what had come before.

Overall, this is a powerful book and a really strong debut from the author, and I look forward to reading more of her works in the future. Of Women and Salt takes an honest look at the harsh reality of life for many women, restoring their voices and their dignity, and certainly made me wish for the day when for women everywhere stories like this will be just that – stories.

2 thoughts on “Review: Of Women and Salt by Gabriela Garcia”