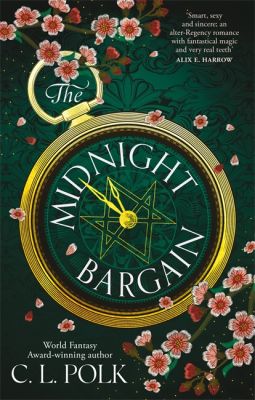 I received an e-arc of this book from the publisher via NetGalley in exchange for my honest review. This did not affect my opinion of the book in any way.
Publisher: Orbit

Beatrice Clayborn is a sorceress who practices magic in secret, terrified of the day she will be locked into a marital collar to cut off her powers. She dreams of becoming a full-fledged mage, but her family are in severe debt, and only her marriage can save them.

Beatrice finds a grimoire with the key to becoming a mage, but a rival sorceress swindles the book right out of her hands. Beatrice summons a spirit to help, but her new ally exacts a price: Beatrice’s first kiss… with the sorceress’s brother: the handsome, compassionate, and fabulously wealthy Ianthe Lavan.

From the World Fantasy Award-winning author of Witchmark comes a sweeping, romantic new fantasy set in a world reminiscent of Regency England, where women’s magic is taken from them when they marry. A sorceress must balance her desire to become the first great female magician against her duty to her family.

The Midnight Bargain is a charming, easy read, tackling themes of gender equality and power through a Regency-esque fantasy. Beatrice Clayborn is a powerful sorceress in a world where women are not allowed to practise magic and are locked into a marital collar that cuts off their powers. But Beatrice is determined to not let this become her fate, even as her family pushes her to marry to lift them out of the severe debt they have fallen into.

I really liked following Beatrice as the main character. She is powerful and knows it, and she is ready to challenge the whole of society for her right to become a mage – even if she has to do so in secret, risking everything. I wasn’t too keen on the magic system itself, which seems to be strongly based in the mage being possessed by a spirit. Women learn magic from coded grimoires hidden in plain sight, and we get a fair bit of insight into how the magic works by following Beatrice as she conjures a luck spirit, Nadi.

Nadi was by far my favourite part of the book. I absolutely adored her and would totally take her with me everywhere and give her lots of cake. Nadi was a breath of fresh air in an otherwise quite predictable plot and character development. The rest of the cast is frankly quite forgettable, and the love interest, Ianthe, was quite bland for my taste. I also couldn’t forgive the instalove and, even though I tried to look past it to enjoy the rest of the book, it bothered me to no end that Beatrice and Ianthe would be madly in love after briefly speaking ONCE. Ianthe’s sister (and aspiring sorceress) Ysbeta was honestly a much more interesting character and I felt more chemistry between her and Beatrice, to the extent that I would have greatly preferred seeing them as a couple rather than the usual, predictable romance.

Crossing magic with a period drama is a great idea, especially for someone like me who loves both those elements, so I did overall enjoy reading this book. However, it was not without its faults. The plot was quite thin, the magic system problematic and the romance disappointing – in many ways, it reminded me of my experience watching Bridgerton, which I also found entertaining but deeply problematic. And yes, I did imagine Beatrice and Ianthe like this every time a dance was mentioned:

I appreciated the effort to include a gender equality theme in the book, even though at times it felt more like reading a Feminism 101 guide disguised as a fantasy rather than a story seamlessly incorporating these themes.

Overall, The Midnight Bargain was a pleasant enough read, in no small part thanks to the author’s excellent writing style. It had some serious issues for me (mostly the thin plot and overreliance on the instalove), but some charismatic characters and the never-ending charm of the Regency-like setting somewhat made up for those, leaving me mostly satisfied and only partly wishing that this book had dared go further to reach its full potential.