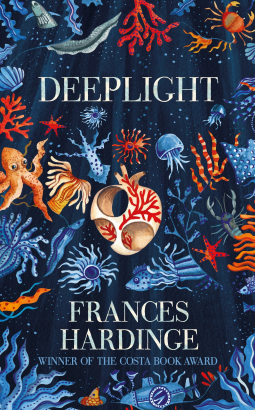 The gods were as real as the coastlines and currents, and as merciless as the winds and whirlpools. For centuries the gods of the Undersea ruled the islands of the Myriad through awe and terror: they were very real, and very dangerous.

Sacrifices were hurled into the waters to appease them, and every boat was painted with pleading eyes to entreat their mercy. They were served, feared and adored. Then, thirty years ago, the gods rose up in madness and tore each other apart. Now, none remain.

The islands have recovered and the people have patched their battered ships and moved on. On one of these islands live Hark and his best friend Jelt. To them, the gods are nothing but a collection of valuable scraps to be scavenged from the ocean and sold.

But now something is pulsing beneath the waves, calling to someone brave enough to retrieve it.

I read Frances Hardinge’s The Lie Tree a few years ago and I absolutely loved it, so I was really excited to read Deeplight. Also, can we just take a moment to admire its GORGEOUS cover?

Deeplight is an extremely original book, and the author’s world-building is top notch. The islands’ history and lore are explained in detail, and the people’s complex relationship with their now-extinct gods is explored without it ever feeling like a (fictional) history lesson. It does, however, really take its time with this and I ended up finding the slow pace of the first half rather challenging. I struggled a bit to push through it, and the second half more than compensated for it, but it could easily put some people off.

I really enjoyed seeing the characters evolve throughout the book, although I was more than a little frustrated with them most of the time. Hark was definitely one of the most infuriating characters I’ve seen in a long time, as he keeps making the same mistakes over and over again. He is completely beholden to his best friend Jelt, who supposedly looks after Hark but is rather obviously manipulating and coercing him the entire time. This extremely toxic friendship is the focus of most of the book and, while it does make sense that Hark would be the last one to realise what is glaringly obvious to literally everyone else in the book and out, I was quickly bored by this dynamic.

After pushing through a slow start and an annoying main character, we are rewarded with a wonderful second half and some brilliant supporting characters, all of which more than made up for this book’s flaws. I would have liked to see some more of the gods, but what we did get was enough to keep me reading.

Overall, this was a very original and unique fantasy. It’s a slow burn with a very slow start and depicts a toxic relationship which could be triggering to some, but once the pace picked up it was definitely worth the initial struggle.