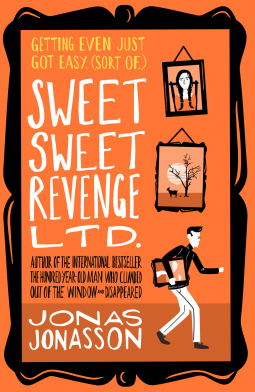 Victor Alderheim has a lot to answer for. Not only has he heartlessly tricked his young ex-wife, Jenny, out of her art gallery inheritance, but he has also abandoned his son, Kevin, to die in the middle of the Kenyan savanna.

It doesn’t occur to Victor that Kevin might be rescued and adopted by a Maasai medicine man, or that he might be expected to undergo the rituals expected of all new Maasai warriors – which have him running back to Stockholm as fast as you can say circumcision without anaesthetic.

Back in Stockholm, Kevin’s path crosses with Jenny’s – and they have an awful lot to talk about, not least a shared desire to get even with Victor. So it’s convenient when they run into a man selling revenge services, who has an ingenious idea involving Victor’s cellar, a goat, some forged paintings, four large boxes of sex toys and a kilo of flour…

I love Jonas Jonasson’s books, and The 100-Year-Old Man Who Climbed Out the Window and Disappeared remains one of my all-time favourite books. When I heard we were getting a new Jonasson book, I was beyond excited and more than ready for another wild ride filled with his trademark witty humour, sharp social commentary and surreal situations. Unfortunately, Sweet Sweet Revenge Ltd didn’t quite deliver for me.

For starters, I had major issues with the pacing. The entire first half of the book moved way too slowly as we got a detailed backstory for every character. I would have appreciated this if it served to deliver fuller, more well-rounded characters (even if they were still Jonasson’s usual eccentric brand), but sadly most of them remained quite flat throughout. Victor, the villain, his ex-wife Jenny and his son Kevin were prime examples of this: despite very detailed backstories, I still felt like there wasn’t much to these characters. This was particularly disappointing in Victor’s case, who had huge potential for further exploration and the sharp satire that Jonasson usually handles so well.

The book picked up considerably in the second half, and especially when Ole Mbatian, a Massai medicine man who has never left his small village whose chief still refuses to use electricity, travels to Stockholm to find his adopted son Kevin. Ole stole all the scenes he was in and his exchanges with the police inspector were hilarious – pretty much what I expected from the whole novel. I also enjoyed learning something about Irma Stern, an artist I knew nothing about but whose work I’ll definitely be checking out more after reading this book.

Overall, this was an entertaining read despite its issues, and my disappointment in it might have stemmed more from my high expectations than anything else. A comedy of errors that missed the mark for me, but still good enough to pass a few hours.