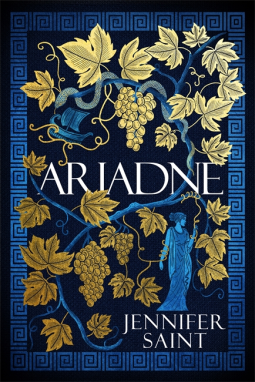 As Princesses of Crete and daughters of the fearsome King Minos, Ariadne and her sister Phaedra grow up hearing the hoofbeats and bellows of the Minotaur echo from the Labyrinth beneath the palace. The Minotaur – Minos’s greatest shame and Ariadne’s brother – demands blood every year.

When Theseus, Prince of Athens, arrives in Crete as a sacrifice to the beast, Ariadne falls in love with him. But helping Theseus kill the monster means betraying her family and country, and Ariadne knows only too well that in a world ruled by mercurial gods drawing their attention can cost you everything.

In a world where women are nothing more than the pawns of powerful men, will Ariadne’s decision to betray Crete for Theseus ensure her happy ending? Or will she find herself sacrificed for her lover’s ambition?

I love retellings of Greek myths, so when I heard that Ariadne was going to be the protagonist of one, I was beyond excited. Ariadne is definitely one of the many, many women in Greek mythology to be sidelined, used and discarded and, ultimately, forgotten. Following in the footsteps of books like Circe and The Silence of the Girls (which I reviewed a few months ago), Ariadne seeks to rebalance the story, placing the titular princess at the centre of its narration.

In fact, the book follows two women: Ariadne and her sister Phaedra, who has so far been snubbed even more than her more famous sister. I was extremely unfamiliar with her character even in the original myth, and while I could vaguely recall having heard the name before, I would have struggled to say anything more than that about her. Rediscovering these two characters was really great, and the book does a good job of placing them front and centre of the narration – definitely more than The Silence of the Girls did with Briseis. Nonetheless, I felt that something was still missing and Ariadne somehow failed to reach its true potential as a great retelling.

Most of it, for me, fell down to the narration. There is A LOT of telling in this book, as both Ariadne and Phaedra recount what happened to them as if talking directly to the reader. While this gives us great insight into their thoughts and feelings – which are very well depicted – it does make for a very slow pace and falls quite flat in places where more could certainly have been shown. There is also a fair bit of info-dumping, as different characters share various other Greek myths: Theseus in particular is guilty of an extremely long passage doing exactly that.

What the book does a great job of, though, is sharing the pain and suffering of women who are constantly pawns in the games of gods and men: used, abused, punished and toyed with by both. Whether they are queens or common women ultimately doesn’t matter, as they are all equally victims of an unjust, misogynist society. There are a lot of secondary themes running just under the surface, and I particularly enjoyed the reflections on motherhood and the different experiences of the characters.

Ultimately, I did enjoy Ariadne and, even though it never quite reached the peaks of Circe, it is a solid retelling that actually gives women a voice and calls out gods, heroes and common men alike for the way they treat the women around them. It would appeal to lovers of Greek myth and retellings, especially those who don’t mind a slower pace and very limited action.