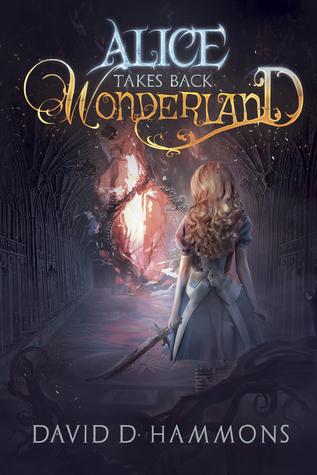 After ten years of being told she can’t tell the difference between real life and a fairy tale, Alice finally stops believing in Wonderland. So when the White Rabbit shows up at her house, Alice thinks she’s going crazy. Only when the White Rabbit kicks her down the rabbit hole does Alice realize that the magical land she visited as a child is real. But all is not well in Wonderland.

The Ace of Spades has taken over Wonderland and is systematically dismantling all that makes it wonderful. Plain is replacing wondrous, logical is replacing magical, and reason is destroying madness. Alice decides she must help the Mad Hatter and all those fighting to keep Wonderland wonderful. But how can she face such danger when she is just a girl? Alice must journey across the stars to unite an army. She discovers that fairy tales are real in the magical world beyond the rabbit hole. But they are not the fairy tales she knows. Fairy tales have dangers and adventures of their own, and Alice must overcome the trials of these old stories if she wants to unite the lands against Ace. With the help of Peter Pan, Pinocchio, Snow White and heroes old and new, Alice may have the strength to take back Wonderland.

This pretty much sums up my thoughts on this book. I simply LOVED it!! If you’ve been here before, you’ll have probably realised by now that I love fairytales and retellings with a passion. So this mashup of all the major fairytales was right up my alley. And boy, did I enjoy reading it!

Ok, so you probably don’t want to hear me go on and on rambling incoherently about all the things I liked about this book, so I’ll try to keep it short and make some sense.

The premise is very interesting: after Alice left Wonderland, the Ace of Spades took power for himself, and started taking the wonder away from Wonderland in order to make it a more logical and rational world. When things start taking a terribly dark turn, the White Rabbit decides to go fetch Alice again, so that she may bring back everything that Ace has taken away. Of course, this isn’t all too easy for poor Alice, who in the meantime has been labelled as crazy in her own world and had just managed to stop believing in Wonderland. And things take an even crazier turn when she discovers that the only way to defeat Ace is to journey to other mysterious lands where all the fairy tales she grew up reading are very real indeed, and very different too.

I really enjoyed journeying with Alice. I especially liked to see her develop so greatly throughout the book. She starts out being very insecure, constantly questioning herself and her ability to distinguish between reality and fantasy, and feeling like she isn’t up to the task that she’s been entrusted with. But as she journeys on and makes new friends, Alice grows to be the leader she is supposed to become, a strong-willed woman who’s not afraid of doing whatever it takes to save the ones she loves.

“It’s okay to be scared. You just can’t let it keep you from doing what you need to do”

The other characters were great, too! I particularly liked the new spin the author gave on old stories, and I had a great time trying to recognise the characters from the little hints to their identities spread throughout the story before they were fully revealed. It was really great to see all my favourite stories come together, Peter Pan with Pinocchio, Snow White with Robin Hood, all coming together in one great story. I really liked the romance as well, how it developed slowly and didn’t take over the whole book, but was still cute enough to have me root for my ship until the very end. My only complaint (because I really should have at least one) is that I would have like to see more of the villains. I mean, there were several and they all had their role to play, but they weren’t quite as villanous as I would have expected them to be. That being said, it did still all work very well within the story as a whole.

Overall, this was definitely one of my favourite reads this year, and one of the best retellings/mashups I have read! Really relatable characters, great world building and an adventurous quest make it a must read for all fairytale lovers out there.

And if you’ve already read this, you’ll certainly understand why we must say goodbye like this…