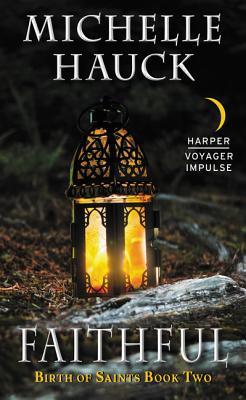 I received an e-arc of this book via Edelweiss in exchange for my honest review as part of the blog tour organised by RockStar Book Tours. This did not affect my opinion of the book in any way.

Following Grudging — and with a mix of Terry Goodkind and Bernard Cornwall — religion, witchcraft, and chivalry war in Faithful, the exciting new chapter in Michelle Hauck’s Birth of Saints series!

A world of Fear and death… and those trying to save it.

Colina Hermosa has burned to the ground. The Northern invaders continue their assault on the ciudades-estados. Terror has taken hold, and those that should be allies betray each other in hopes of their own survival. As the realities of this devastating and unprovoked war settles in, what can they do to fight back?

On a mission of hope, an unlikely group sets out to find a teacher for Claire, and a new weapon to use against the Northerners and their swelling army.

What they find instead is an old woman.

But she’s not a random crone – she’s Claire’s grandmother. She’s also a Woman of the Song, and her music is both strong and horrible. And while Claire has already seen the power of her own Song, she is scared of her inability to control it, having seen how her magic has brought evil to the world, killing without reason or remorse. To preserve a life of honour and light, Ramiro and Claire will need to convince the old woman to teach them a way so that the power of the Song can be used for good. Otherwise, they’ll just be destroyers themselves, no better than the Northerners and their false god, Dal. With the annihilation their enemy has planned, though, they may not have a choice.

A tale of fear and tragedy, hope and redemption, Faithful is the harrowing second entry in the Birth of Saints trilogy.

I read and reviewed the first book in this trilogy, Grudging, as my first book of the year, so it is only fitting that as the year draws to a close, I should be so lucky as to take part in the blog tour for the second book. I loved Grudging, back in January, and am incredibly happy to say that my love for this series only grows stronger after reading Faithful!

Now, I am notoriously bad at finishing series. Usually, I read the first book and then put off reading any sequel because I am just so scared of being disappointed by “fillers” up to the final installment. Gladly, I didn’t fall into this trap with Faithful.

This book picks up just a little after Grudging had closed, with the people of Colina Hermosa, Ramiro and Claire still trying to deal with the aftermath of their encounter with the Northerners. From the very beginning, we start to catch glimpses of the main themes that will accompany us throughout the rest of the book. Building on from what was started in Grudging, the role of women in society is further explored, as several strong female figures jump to the lead of their respective societies, opposing world-views clash. I really enjoyed seeing the evolution of Claire’s character in particular: still struggling to accept the consequences of the magic she performed in order to save the people of Colina Hermosa, she also has to come to terms with the fact that they seem to fear and distrust her.

And dealing with the consequences of difficult choices is one of the recurring themes of the book: Claire and Ramiro, but also Julian and Beatriz, Teresa and Father Telo… in this time of uncertainty and war, everyone has to make incredibly tough choices, and is left wondering whether the path chosen was indeed the right one. And dealing with the consequences of it all. As in the previous book, the characters were stunning. Each one is perfectly crafted in an incredibly realistic way that makes them stand out as individuals, struggling to cope with the loss of everything they hold dear: family, friends, home and possibly everything they had ever known. The cast is varied, and all the stories intersect and are masterfully weaved together to great a complex world.

In short, Faithful is a great addition to a fantastic series. A middle book that never feels like just a filler, Faithful combines fantasy, action and romance, giving us a great story set in a complex world with constantly-evolving characters. I honestly cannot wait to see how the story will end. Definitely one of my favourite reads this year, this is one series you do not want to miss!

She is a co-host of the yearly contests Query Kombat and Nightmare on Query Street, and Sun versus Snow.

Her epic fantasy, Kindar’s Cure, is published by Divertir Publishing. Her short story, Frost and Fog, is published by The Elephant’s Bookshelf Press in their anthology, Summer’s Double Edge. She’s repped by Sarah Negovetich of Corvisiero Literary.

Time for a giveaway!

Be sure to check out the other stops on the tour!