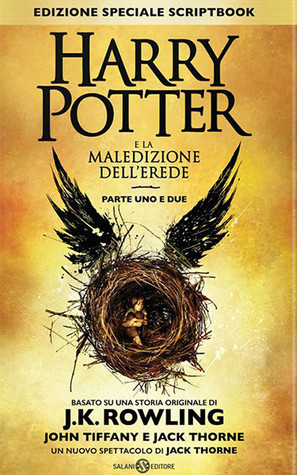 Based on an original new story by J.K. Rowling, Jack Thorne and John Tiffany, a new play by Jack Thorne, Harry Potter and the Cursed Child is the eighth story in the Harry Potter series and the first official Harry Potter story to be presented on stage. The play will receive its world premier in London’s West End on July 30, 2016.

It was always difficult being Harry Potter and it isn’t much easier now that he is an overworked employee of the Ministry of Magic, a husband and father of three school-age children. While Harry grapples with a past that refuses to stay where it belongs, his youngest son Albus must struggle with the weight of a family legacy he never wanted. As past and present fuse ominously, both father and son learn the uncomfortable truth: sometimes, darkness comes from unexpected places.

Going back to the Harry Potter universe after all these years felt really good! I honestly had incredibly low expectations about this book, and when it first came out I actually thought I wouldn’t read it… but then I was won over by curiosity, and I’m kind of glad I did.

Of course, this book doesn’t come even close to the awesomeness that was the original series, but as far as sequels go, it wasn’t all that bad. I still think the main reason I liked it was the fact that it all felt incredibly familiar, like coming home after a long trip. Being a theatre script, it lacks all the descriptive parts of a classically told novel, but I still found I didn’t actually need them. The Harry Potter universe is so familiar to me, that my mind pictured the settings and the characters with no prompts needed.

As far as the plot goes, I did actually enjoy it. There weren’t any major surprises for me, as I kind of guessed the big reveal half-way through the book, but I did enjoy seeing how we got there. And the thing that worried me most (reading a script) actually didn’t bother me at all in the end: I was slightly disoriented at the beginning, but I got into it soon enough, and by the end of the book, I didn’t even realise I was reading a script anymore.

Overall, I enjoyed this book mainly because it was a Harry Potter book, and I liked going back to settings and characters that have been such a big part of my teen years. I’m pretty certain that seeing the actual play would be spectacular, and the book doesn’t really do it justice. Still, it was an enjoyable read which brought back a wave of nostalgia. I might just re-read the whole series after this…