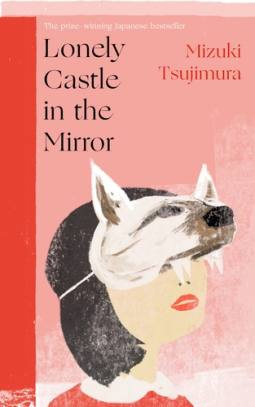 I received an e-arc of this book from the publisher via NetGalley in exchange for my honest review. This did not affect my opinion of the book in any way.
Publisher: Doubleday

Seven students are avoiding going to school, hiding in their darkened bedrooms, unable to face their family and friends, until the moment they discover a portal into another world that offers a temporary escape from their stressful lives. Passing through a glowing mirror, they gather in a magnificent castle which becomes their playground and refuge during school hours. The students are tasked with locating a key, hidden somewhere in the castle, that will allow whoever finds it to be granted one wish. At this moment, the castle will vanish, along with all memories they may have of their adventure. If they fail to leave the castle by 5 pm every afternoon, they will be eaten by the keeper of the castle, an easily provoked and shrill creature named the Wolf Queen.

Delving into their emotional lives with sympathy and generous warmth, Lonely Castle in the Mirror shows the unexpected rewards of reaching out to others. Exploring vivid human stories with a twisty and puzzle-like plot, this heart-warming novel is full of joy and hope for anyone touched by sadness and vulnerability.

Lonely Castle in the Mirror is one of those books that left me thinking about them long after I finished them, its themes and characters still living in my mind weeks later. To be completely honest, this is one book I wasn’t too sure about initially since I wasn’t quite sure what to expect from it, but I’m so glad I gave it a go!

I went in knowing very little (I’d only read the blurb) and even so I found something quite different from what I’d expected. For starters, I thought the fantastical elements would be a lot more central to the story. That wasn’t so, and I’m actually glad that the book developed in the way that it does. This book is its characters more than anything else and they are real kids facing all-too-real problems. Magic intervenes to pull them out of their daily lives and into the castle through the mirror, but from there it’s all up to them.

If you’ve been reading my reviews for a while, you know that good characters are one of the key elements that will make or break a book for me and these characters definitely stole my heart. The book follows primarily one of the seven children, Kokoro, who stopped attending school due to bullying but cannot bring herself to open up with any of the adults around her to tell them what she went through. Kokoro’s pain and struggle with anxiety in the aftermath of a serious incident were nuanced and depicted incredibly delicately and accurately. I really wanted to just hug Kokoro most of the time, as I could feel her pain and fear.

The other children were all equally fighting their own battles, struggling with mental health, bullying, death and sexual abuse, and were all equally compelling. I loved how we slowly got to see and understand more of who they really were and how they were feeling as they grew more comfortable around one another and started trusting each other. The friendships and tensions all felt extremely realistic, and I found myself getting attached to each of the characters as Kokoro did. While we got a glimpse into other characters’ POVs, I would have liked to get to know them more intimately as we did Kokoro, even though it’s probably best that we didn’t as this kept the interactions more real, even in a fantasy world. Some of the children seemed slightly better developed than others, which was a shame, but overall they were all extremely compelling characters.

The only thing I really struggled with was the pace, which at times slowed down a bit too much for my liking. A few of the scenes in the castle, especially towards the middle of the book, felt like they dragged on a bit. This was more than compensated in the second half of the book. The pace picked up considerably with around 100 pages left to go, and I found myself completely unable to put it down! The ending was also incredibly satisfying and I completely did not see it coming, even though in hindsight all the hints were hidden in plain sight. I also got very emotional towards the end!

I don’t know much about Japanese culture, so I really enjoyed learning more about it through this book. In particular, I had no idea that school abandonment and bullying were such serious issues in the country, and of the mental health crisis facing children and teenagers. This book does a wonderful job of raising awareness of these issues, which are also prevalent in Western societies, and in telling everyone who might be struggling: You are not alone.

Overall, this is a gorgeous read tackling complex and painful subjects, while at the same time acting as a reminder of the beauty to be found in genuine human connection and relationships. A tale of friendship and hope and the power of love in all its forms that I will definitely return to in the future. Highly recommended if you love character-driven stories and don’t mind a slower pace.

1 thought on “Review: Lonely Castle in the Mirror by Mizuki Tsujimura”